I ran the Rails to Entrails 5K on October 21 in New Boston, NH. New Boston is a sleepy little suburb of Manchester, so it took us just under an hour to get there on a somewhat temperate Sunday morning.

This was the first year that they had this race. It was designed to raise money for the rail trail in the town, and so that we could also experience the trail itself. Let me tell you: this was a serious workout for a 5K! 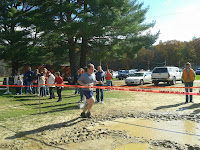 There were several heats going every half hour until the afternoon. The runners (or "fresh meat") were given three flags (think flag football) to wear and for the zombies to try to grab as you ran by them. And a lot of those zombies took their job very seriously. If you lost all three of your flags, you were undead and could continue through the course.

There were a lot of obstacles through the course. There were sand mounds to climb and descend. There were tires to run through and metal tubes to crawl through. The course was also extremely muddy. Intentionally so. There were several parts where there was no other way to get by than to go through a ton of mud.

There were also some serious hills. There first mile or so was mostly flat with a little uphill here and there. But miles 2 and 3 were almost completely uphill. And this wasn't one of those uphills where you slow your run down. This was essentially a hike up the hill. 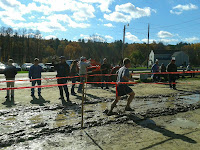 A 5K isn't a long distance and certainly isn't one that I have difficult doing. But, I never anticipated how winded I could get from having to sprint and slow down so many times in order to avoid the zombies. I guess it's not all that different from the fartleks that people do when they're training.

The obstacles required a bit of energy, too, so I was quite tired when I finally finished the race. I was far from speedy (47:51 -- a 15:24/mile pace), but that was OK because I had a lot of fun and I got a good workout.

I'm not sure that I would run this again. I don't tend to get into the obstacle races or getting super muddy when I run. I'm not sure if that makes me more of a purist, but it certainly makes me cleaner by the end.