When we last left our hero (ahem, pre-race report), the race was about to start. I did my pre-race tweet and we were off!

We started on a nice decline and then went immediately into a park. The park was all towpath (packed down mud and gravel) and it felt great. We looped through the park and worked our way into Allentown.

As I mentioned, I was pretty sure it was going to be a bit of an emotional race for me. I loved the 7 years I spent in Allentown and I miss it a lot. I was getting emotional at the start and was feeling it for the majority of the first 10 miles or so. The city streets took us through areas where I had spent a happy time in my life. I went past the street where a crazy ex-girlfriend lived (aren't all exes crazy?) and streets where I used to drive to my internship during college. I saw one of the apartment complexes I had looked at when I first moved to the area. It was bringing back all sorts of good memories.

And then we got to the first exchange. There was a marathon relay and there were five exchanges along the course where runners would tag one another. This was also where the big crowds were because a good deal of the race was on trails. I thought that I would be alone going through this first e 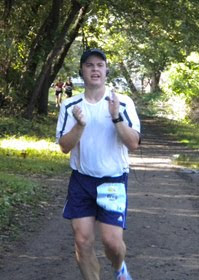 xchange. I knew that I'd be fine 5 miles in, so I wanted to place spectators farther out when I really needed the motivation.

But then I got my first surprise. My mom and sister had come to the first exchange. While I didn't need to see them, it was a huge burst of energy for me. I was feeling good and probably still looked pretty good. I was 5 miles in and at 45 minutes--a 9-minute pace. The pace felt great and the time was good, too.

Miles 5-10 took me into another park and through some shade. We had some water on the towpath, but nothing too bad. It had rained the previous two days, so it just hadn't all dried up yet. I was keeping an 8:45-9 minute pace and not struggling much. I took water at the first couple of stations and then started to take PowerAde. At this point, I felt like I could run forever.

I was really feeling good through miles 10-15 as well. I amused myself by grabbing gummy bears out of my running pack and chewing on them. I got to see my parents and friends again at a few more exchanges, at from what they said, my pace was right on and I was looking good.

I tweeted every 5 miles with the mileage and total time (though it looks like mile 10 may not have gone through). I found that to be a nice distraction because I looked forward to updating my time at 5-mile markers. It also helped me to track my progress later.

I did run into a problem around mile 17 or 18. I had the dreaded bloody nipple. I had put two band-aids on both nipples in the morning, but apparently one side came completely off. With the humidity and the shirt scraping against my chest, I noticed a stream of blood going down my shirt. Makes me very happy that I brought a change of shirt and hat for my dad to give me at mile 22.

Mile 20 is when I started to slow a bit. I was at 2:57 (averaging an 8:51/mile pace), but the majority of the next 6 miles would be a steady uphill. I started to play the mental games with myself. OK, run to the 5th tree in the distance and then you can walk for three trees. OK, now run to the water station and then you can walk for a few minutes. Lather, rinse, and repeat.

When I hit 20, I knew that all I had left was a 10K. And I can do a 10K in my sleep. 6.2 miles was what separated me from the finish line and potentially a sub-4-hour marathon. I had never really given it much credence up until that point. The next 6.2 miles took me 59 minutes (about a 10-minute pace), and it was one long hour.

I saw my family at the last exchange (mile 22.6). My dad told me that I was still making great time and this is when I knew that if I dug in, I'd go sub-4. My calves were a bit cramped, but my feet felt fine and so did my knees. I decided that I was going to leave it all out on the course. But my mind forgot to tell my legs that around mile 24.

At mile 24, I was just dying on the vine. My legs were heavy and I was tired. I was ready to be done with it. I looked at my watch and was around 3:35 at that point. I knew that if I could do the remaining two miles in 25 minutes, then I'd go sub-4. And that's when I decided there was no way it wasn't going to happen.

My pace picked up and I started passing people like crazy. I was using my arms to pump me and my heart to keep me going. We finally got off the trail and did the last 4/10 of a mile on concrete as we went toward the finish line. My Garmin had me about .2 miles ahead of the course, but I think that was just me not always taking the "inside" lane as I was running.

Anyway, we round the corner and headed toward the finish. As I saw the crowd (and looked at my watch), I knew I was going to go sub-4. I started clapping my hands, shaking my fists and kept yelling "26.2 baby! That's right. Let's hear it!" and the crowd just roared. I was so excited that I couldn't contain it. Imagine having energy at that point.

I crossed the line and immediately went to sit down. My Garmin said 3:56:28, but the official chip time was 3:56:25. I had just beaten my old marathon PR by almost an hour, and broken 4 hours. I wasn't dreaming. I had done it and if I were so exhausted, I would have been jumping up and down for joy.

That was a good day. 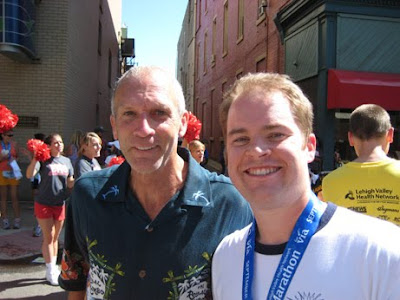 With my running hero, Bart Yasso 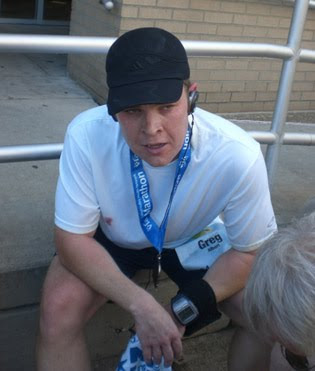 Post-finish exhaustion
Posted by Road Warrior at 8:00 AM

WELL DONE!!! And congrats again on your PR!! Great race report, and awesome that you got a pic taken with Bart!

This is SO motivating for me and just what I needed to read right now. It's those last 10K that I need to learn to push through. Way to finish strong! What an excellent race.

Well done! Great distraction tips. I would love to know - did you have any inkling that you could break your previous marathon time by such a massive amount? I mean, that's not shaving a minute off. A whole hour!

What an amazing report. You seem to have been so in control of your mind and body all through the race - did it feel like that? I'm so impressed that you had a strategy and stuck to that - I think that really works. Amazing that your father knows you s well - and also amazing that you had your picture taking with Bart - very impressive stuff! You'll be inspiring me this weekend.

Congrats on that HUGE PR!!!

Wow, 4200 ft of climbing and descent -- that is an EXTREMELY hilly course! I don't think even the San Francisco marathon course I ran had that much climbing/descent, and that's probably the hilliest course I've ever run. No wonder you were tired at the end.

Rest up and treat yourself well. You deserve it!