I completed the Lincoln Tunnel 5K race this weekend in New York City. There were over 2,000 people pre-registered and there were probably a couple hundred more people who signed up at the site.

If you're not familiar with the Lincoln Tunnel, it's the long tunnel that connects New Jersey and New York under the Hudson River. Needless to say, this was done purely for novelty as I can run a 5K in my sleep and I'd never get a chance to run through the Lincoln Tunnel again, unless I'm being chased.

The race itself was a lot of fun. It was pretty surreal running through a tunnel that I used to drive through all the time. The tunnel itself was pretty clean (they cleaned it the night before) and there weren't any problems with latent fumes or anything. We simply ran to the end of the tunnel (the New York side) and then ran back to the New Jersey side.

The tunnel itself was packed with runners and the chip was only for the finish line so there's no net time. I forgot to bring my Garmin, which wouldn't have been much help for distance but it would have for time.

As for my time, the official time was 30:18 (a 9:45 pace), but I think my time was closer to, eh, 27 minutes or so. I really couldn't care less. I was just out to have a good time and enjoy the once in a lifetime experience.

As an added bonus, my family was there with me and saw me finish. It wasn't quite the finish of the New Orleans Marathon (see report here and photos here), but it was great to have them there.

All in all, I was very glad I did it. It had a nice novelty and a T-shirt to wear for the ages!

UPDATE: ShoreTurtle posted some nice pictures of the race. Apparently he, unlike me as always, was prepared.
Posted by Road Warrior at 11:36 PM 8 comments:

I'm 823 miles into my trip and just north of Hagarstown, IL on I70 towards St. Louis. I'll continue on Rt. 70 until I hit St. Louis and then I'll continue southwest toward LA.

My progress has been slow since I've developed some knee pain, but I'm continuing. My goal is to be 1/3 of the way to LA by May 18 which is one year from the day I started tracking my runs and 2 years from the hopeful end of my journey.
Posted by Road Warrior at 10:01 PM 2 comments:

Just what I didn't Kneed

Since the marathon, I've been enjoying the time off and have started to explore other areas of my town. I've run down streets that I had never run down before and explored a bit. That was fun and gave me some variety as the running has started to bore me a bit.

I didn't go out too far or too fast. I just let my pace naturally fall wherever it decided to fall. Since I'm not yet training for a race, I wasn't all that concerned with the pace. That said, some of the exploring took me up some unexpected hills that I wasn't used to training on.

So, long story long, I think I did something to my knee. The left side of my left knee is hurting quite a bit today. In fact, I only ran once last week and twice the week before because of the pain.

I don't know exactly what it is, but I thought it might be an IT band injury. I know that it's common for runners who do a lot of road running and one of the symptoms is outer knee pain. So, being the self-medicating doctor I am, I decided to buy an IT therapy band to put around my left leg to stop the pain. Did it work?

Well, kinda. The first time I used it it was under jogging pants and it kept sliding down and I had a tough time adjusting it. Yesterday, the first day that I could wear shorts outside (woo-hoo!), I decided to use it and go at a slow pace.

I was doing fine and was in mile 3 of 4. I stopped at a light to left traffic go and then started to run across the road. Apparently I planted my left foot first and that was the wrong move. I stumbled home and have been in quite a lot of pain ever since.

Now normally if I were working, I'd have insurance that would cover a doctor's appointment to get X-rays, etc. Turns out that our law school insurance likely only covers death--and even then, it's touch and go after filling out a lot of forms. So, I may very well have to just continue to rest it and try to figure out what the cause is on my own.

That said, my progress has been less than impressive and I'm just trying to stay off of it and let it heal. Oh, just what I didn't kneed. (get it?)
Posted by Road Warrior at 11:18 AM 7 comments:

I finally got the pictures from the New Orleans marathon. By finally, I mean I've had them for a couple of weeks and am now just getting a chance to post them. There are plenty more, but these are the best. 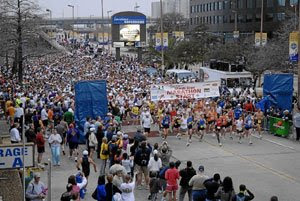 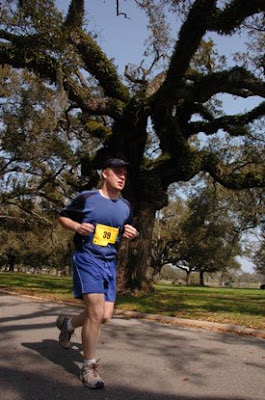 In the park around mile 8 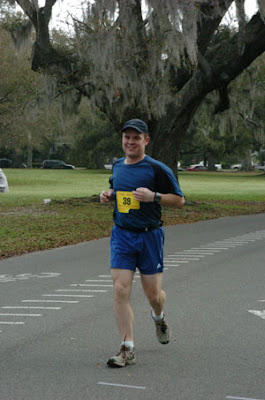 Around Mile 24 (I was starting to hurt at this point) 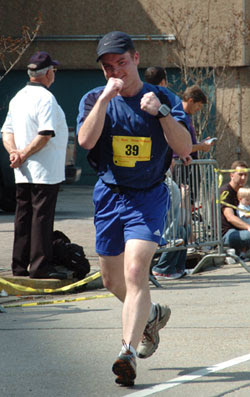 Right at the finish (the required Rocky pose at Mile 26.1) 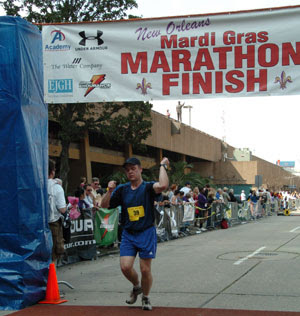 The finish (note: raise your hands earlier next time)
Posted by Road Warrior at 9:13 AM 7 comments: