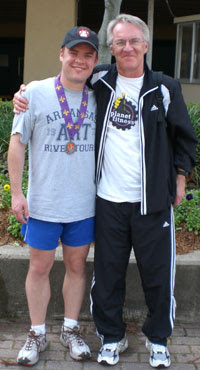 So I'm more than 3 weeks late on this post and Father's Day was last weekend, but better late than never when it comes to Take It and Run Thursday.

I had a wonderful childhood growing up. My parents were supportive of anything and everything I wanted to try. They encouraged me and took me to the store for soccer cleats, sneakers, bats, you name it. And it wasn't just sports. They encouraged me in the classroom and socially. In short, as Randy Pausch said in his book, I hit the parental lottery. I think I knew it at the time but I've been able to appreciate it more and more by the day.

In fact, my parents' 34th anniversary was on Father's Day, so there was a double celebration. They're as much in love now as they were 34 years ago (or so they tell me).

While both parents were incredibly encouraging, it was my dad that inspired me to run. When I was three years old, he trained for a marathon in Harrisburg, PA. He's been athletic his whole life and really took to the training. And when I say training, he did it big time. While most people do some intervals and a couple long runs, he went all out. In the months before the marathon, he was topping out at 50-60 miles a week consistently. And, he was doing this with a wife and 3-year old at home. Oh, and a full-time job. He's amazing.

At some point, I want to sit down and interview him about his experience. At that time (1982), no one knew about how long you could wear sneakers, what gels were, what and why to taper, etc. He just ran because he loved to do it, and he was good at it.

He was training to qualify for Boston, which at that time was a 3:00 marathon (vs. 3:10 now). And he was on track for the whole race until he had to stop at mile 24 to walk. He was getting dizzy (no electrolyte training) and was cramping. That walking cost him a BQ and he finished at 3:14. He knew then that he never wanted to do it again.

He joined me at the New Orleans Marathon last February. The picture at the top left is after the race. I have it framed and sitting in my living room. I look at it often and just can't stop smiling. If you look at that picture, you can see how much pride he has in his son. We couldn't get those smiles off our faces all day.

And now? He's been trying and trying to get back into running because I think he misses it now that I'm doing all these crazy races. He has a bad back and that's caused him problems in the past, but I know he wants to hit the roads and do a little something. I'm so proud of him for trying to get back out there (in addition to him hitting the gym regularly).

So, thank you, Dad, and Happy Father's Day. On long miles, it's the pride you and Mom have in me that keeps me going.
Posted by Road Warrior at 8:00 AM 4 comments:

Last weekend I did my first "Brick" workout, which was an absolute blast. A Brick workout is where you do a bike ride followed immediately by a run. Though I haven't committed to any triathlons yet (stupid swimming!), this is the first step toward at least a duathlon.

I did all of the preparation work. I filled my bike water bottles and my fuel belt before leaving on the ride. I put my running shoes directly next to the door and wore clothing that worked for both sports. That part was easy since I haven't yet purchased "biking clothing" so my biking clothes are my running clothes. I also haven't purchased biking shoes, so I've been wearing sneakers when I ride.

I know, I'm so hardcore. You don't have to say it.

I did a 14-mile ride without a problem and immediately threw my bike inside, tossed on my fuel belt and went for a good 6-mile run. I didn't have any of the normal problems with my legs feeling weird, like I figured I'd have.

The real surprise, outside of the fact that I loved it as much as I did, was how fast I went out on the run. I looked down at my Garmin a mile in and I was at a 7-minute pace! For someone who struggles to keep 8:30-miles, this was a huge surprise. Of course I immediately slowed down, but shows you what you can do when you're warmed up.

I absolutely loved the breakup of riding/running and I ended up burning nearly 2,000 calories in the process. Don't worry, I made sure to put them back on as soon as possible!
Posted by Road Warrior at 3:35 PM 7 comments:

Email ThisBlogThis!Share to TwitterShare to FacebookShare to Pinterest
Labels: Training 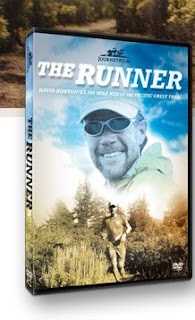 When I started watching movies about runners, I never understood why they'd attempt these ridiculous runs. But, as I watched this movie, I didn't ask that question at all. It's about the end, sure, but it's really about the journey and about doing something you never thought you could do.
Posted by Road Warrior at 8:58 PM 4 comments:

New Runners: We're Rooting for You!

There are two times of the year when new runners tend to start up in droves. You've got the New Year's Resolution crowd and then the warm weather crowd.

Since New England weather is so nasty around New Year's and I don't go to gyms, I only hear from others about how crowded the gyms are. I wouldn't know. I'm still the lone crazy guy trudging through the snow/ice and dealing with the extreme cold. But, from what I hear, those gyms are crazy!

The second time, and the one that I notice, is when it finally gets warm in New England--or warmer, I should say. We've had temps in the 6os/70s, which means that I will actually see people running in the evenings or on the weekends. I know that I don't see them when it gets at all chilly, so my bet is that this is the I-have-to-wear-a-bathing-suit-this-summer crowd.

And you know what? That's absolutely fine. While not all of you will fall in love with the sport, some of you will. And that means there are more runners this year than there were last year. And new runners. And probably some past runners as well. Do we begrudge the fact that you may start and stop? Not at all. In fact, we're rooting for you.

But if you're listening, er, reading, here's what I'd recommend to stay interested in the sport.
At the end of the day, congrats for hitting the roads, even if you decide you don't love it like we do. We'll still be here to greet you if you decide to return.
Posted by Road Warrior at 8:00 AM 3 comments: 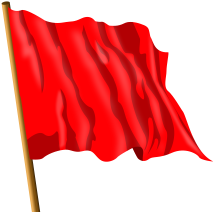 When I started my running journey a couple of years ago, I was very overweight. I'm 5'9" and I weighed closed to 260. I had ended a long-term relationship and I looked at myself in the mirror the next morning. And I didn't like what I saw.

While that moment was important, and one I'll remember for a while, the one that sticks with me is what I call my "red flag" moment. It's when my 38 waist jeans weren't able to fit anymore and I needed to get a 40.

I remember that time at the store. I refused, absolutely refused to buy the next size up. 34, then 36, then 38. But never 40. I just didn't have the heart to hit the next set of 10's. So I didn't buy that size and I decided right then and there to do something about my waistline and general fitness.

Fast forward a couple of years and I continue to keep the weight off, and when the waistline gods are good to me, I even lose a little weight. I'm not stepping on the scale as often, but I'm still aware of my weight. Instead of fretting about the pounds, I look at whether I can comfortably move one notch in on my belt. Conversely, have I not eaten well so that I can't hit that notch? I need to be aware if I'm actually loosening the belt to fit into pants.

Have I given up red flag moments now that I'm where I need to be? Not a chance. There is still a weight that if I get close to it, I become extremely careful about what I eat and I up the mileage to increase my metabolism. I get back down to where I need to be, but that's only because I recognize when things have gotten critical.

I continue to have these red flags because I know how easy it is for weight to start creeping back up. It's happened before and I can't ever let it happen again.
Posted by Road Warrior at 8:35 PM 5 comments: