My girlfriend (GF) and I ran just one hill on Saturday, June 15. That's the upside. The downside is that the hill was 7.6 miles long, and had an elevation of 6,288 feet. And was a mountain.

We ran the Mount Washington Road Race, the 53rd annual run up the Auto Road of the highest mountain on the eastern seaboard. There would be no relief until we reached the top.

In prior years at times of me being in better shape, I had signed up for the lottery for this race. You see, running up a mountain is actually something that a lot of people want to do. So many, actually, that not everyone who wants to run up it can do so.

Each year, I signed up for the lottery and didn't get picked. So we would go to a bar, have some beer, and talk about how great we would have done. This year, however, we would be talking about it after we completed it.

When we found out that we were in, quite a bit of fear entered my brain. GF was much more excited than me about it, and I knew that I had to change my attitude about it. I tried. I really did.

So we did training runs on other mountains. And we did hill runs, and longer runs. But we knew that we could never really prepare for what this race was going to be like.

I knew a couple of things before I ever toed the line for this race. 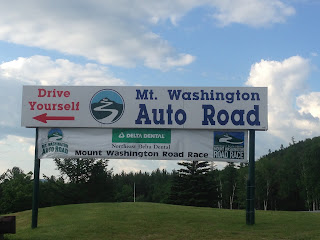 I was correct on all three points. The second that I got picked in the lottery was the first second that I had a fear of doing this and a regret for even signing up for the lottery. In years past, I would have been a bit trepidacious, but nothing like this year. But I knew that I wanted to do this thing and complete so that I could say that I did it, and I could tell myself that I would never have to do it again.

I knew that I didn't have the best attitude about the race. I think if I had been in better shape (like previous years when I didn't get picked), I would have been a lot more excited about it. GF had a much better attitude, and she was really looking forward to it.

The night before the race we stayed at a house with friends in Jackson (about 20 minutes away). We picked up our race packets and started to get an idea of what we had gotten ourselves into. We ate a very bland meal of baked chicken and salad, avoided alcohol completely, and drank a TON of water. We didn't want anything to make running up the hill any more difficult for us.

Race morning we woke up as rested as we could have been. We were meeting GF's mother and sister there (they were kind enough to drive up and then drive us back down!). There was some chaos meeting up with them, but ultimately they made their way up the mountain and we made our way into a bunch of nervous circles and waiting for the port-a-potty.

We started at the very back of the pack. We knew we weren't going to set any records that day, so we didn't want to get in anyone's way. GF and I had decided to run the entire thing together. She's a great runner, especially on the hills. She had done more training, but I tended to be a little bit faster and have more endurance. The perfect combination!

It really was great throughout the race because we were constantly checking on the other person. How are you? Do you need anything? Anything hurting? Need to slow down? Etcetera. Etcetera.

As we start to get out of the tree line, the sun started to hit us, but the wind really hit us! It was beautiful to look at all of the mountains, but it got windier by the step. By the time we got to mile 4, our "run" had been reduced to a moderately fast walk. We were averaging between 15 and 20-minute miles, which was fine for me. Luckily, I brought my yellow windbreaker with me. I didn't need it at all in the first couple of miles, but I was happy I had it when the wind started to whip through us.

By mile 5, we were really ready to be done. We couldn't see any relief, and the mountain was getting steeper and steeper as we went. It was a total ascent to 6,288 feet, but we started around 1,000 feet; so a mile in total elevation. We were exhausted, and our legs were starting to feel like dead weights.

We finally got to the point where we could hear the announcements at the end. It was so unbelievable just to see the Mile 7 sign, but we knew that we still had to complete the last .6 miles, which were a 22% grade. That sucked.

We finally rounded the corner, held hands (I know: groan!), and did our best "run" to cross the finish line. We finished in 2:36:21, a 20:43 pace. We just wanted to finish under the upper limit of 3:02, and we did that with plenty of time to spare. The last couple of miles killed our time, and knocked it from around 15-minute miles to closer to 20-22 minute miles.

We took some pictures, grabbed a blanket, shoved as much food as we could down our throats, and then we had to head back down because they were opening the auto road again!

All in all, I'm beyond glad that we did this race. I'm proud to say that I did it, but I am never going to do it again! 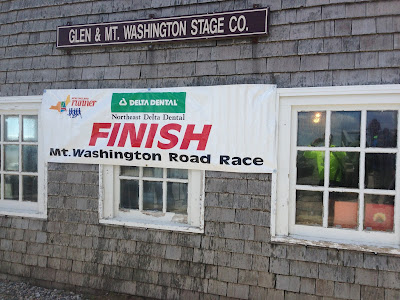