I just surpassed 500 miles (507) and just passed South Vienna, OH. South Vienna, per their web site, is still a center of the farming community and has about 500 residents. It was originally called Vienna (after Vienna, Austria) but it had to change its name because a similarly named town existed. It changed to Vienna Crossroads and then finally to South Vienna in 1908.

Check out the great picture from the web site below. 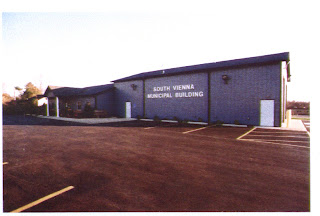 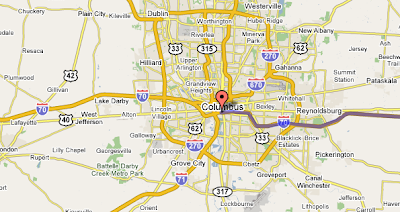 - It's the capital city with a population of 711,000.
- Forbes magazine voted it the 8th best large city to inhabit.
- It's a big sports town, home to The Ohio State Buckeyes, an AFL, NHL, soccer and minor-league baseball team.
Posted by Road Warrior at 7:41 PM 3 comments: 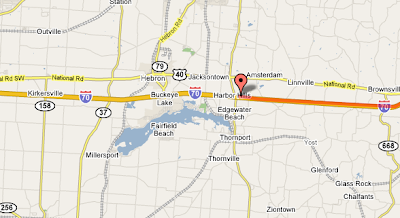 I'm 438 miles in and just getting into Harbor Hills, OH along Rt. 70. Harbor Hills is part of Licking County (oh, so many jokes) and has a population of 1,303 , according to Wikipedia.

Below is a zoomed out view of where I am in Ohio. As you can see, I'm approaching Columbus and then will pass through Dayton before I head into Indiana.

I just got back from the Manchester Half-Marathon and am feeling quite good. I didn't PR (1:57 v. PR of 1:55), but I very well could have if the first couple miles weren't so slow. As you can see from the graph above, once I got past miles 2/3, I really started to pick it up. I finished strong and with a huge smile on my face, which is really the mark of a good race. That said, a couple of observations from the race.

1) Wow, it was hilly, and I mean really hilly. I had no idea, but hills aren't too much of a problem. Actually, I enjoy running them now because I can blow by a lot of people, which is a big confidence booster.
2) At every race, there is a fat guy eating a doughnut and smoking a cigarette. Seriously, every race. It cracks me up every time because there's always one guy and it's the antithesis of the runner's health regimen.
3) I really didn't struggle at all during the race. I was half-tempted to say "let's play two" (ala Ernie Banks), but decided to stick with the half marathon. That said, I still have a whole bunch of training to go for the marathon in February.
4) Another thing that makes me laugh is the race's "punishment" for wearing headphones. They said they'd enforce it (they didn't) and if they caught us with headphones, we'd be disqualified and our time wouldn't be posted.

So that brings me to my final point... who cares if I get disqualified? I'm not out there to win it, and without fail, no one that wins a race is wearing an ipod/headphones. Go ahead and disqualify me. I'll run the race anyway. Whatever.
Posted by Road Warrior at 12:11 PM 4 comments:

I'm 3 days away from the Manchester Half-Marathon and I couldn't be any less stressed. I've done the distance before, so I know that I can do it. My only goal is to run it at 1:55 or under, which I think is very possible.

If I did 1:55, that would put me on pace for a 4:00 marathon (2x + 10 minutes), which is my goal for the Mardi Gras Marathon in February. Tomorrow, I pick up my packet from the expo, procure some Clif Shots and probably go for a quick run.

The best part: they're not even pissy about wearing headphones. I mean, I'd violate that rule anyway, but it's nice not to have to break rules if I can help it.
Posted by Road Warrior at 9:21 PM 2 comments: