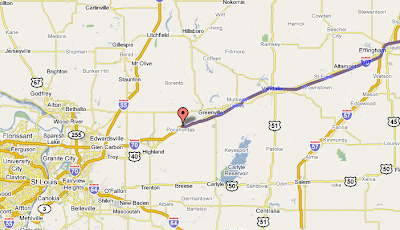 I'm 847 miles in and just north of Pocahontas, IL on Rt. 70 toward St. Louis. At this point, I have 69% of my trip left and with just slightly less than one-third of the time to completion (May 18, 2010). I'm a bit behind, but not much. With my knee feeling a bit better and the summer weather coming, I think I can make it up.

Pocahontas was named after the the famous Native American who saved John Smith's life. It was originally named Hickory Grove and later, Amity before changing its name in 1850 (thanks Wikipedia).