Spectators during routine runs and being a celebrity 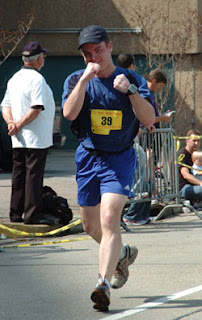 I went on a nice 6-mile run this morning to try to get rid of some of the guilt of drinking a lot yesterday and the upcoming drinking tomorrow to celebrate the end of finals and my first year of law school. Woo hoo!

Anyway, since it's a nice day, there were a lot of people out cleaning their cars, walking, running, biking. I always enjoy these days because when people see you running it's almost like you're in a race and they're watching. I pretend that they're saying things like "look how fast he's running" or "wow, did you see how adeptly he made that turn and trounced up that hill?". I know they're not, but I can pretend.

During the winter in NH when it was in the single digits or negatives with wind chill, people gave me some seriously weird looks and I was positive I knew what was in their head. They thought I was nuts. Heck, I was nuts.

Speaking of that, as I was passing a girl (somewhere in the 18-25 range), she said "hi, Greg.". Odd, as I have no idea who she is. I'm not the most social homeowner and I'm sure that I've never introduced myself to her before. And yet she knew my name.

Now I'm used to the celebrity that I get from having this blog. People typically stop me when I'm having dinner with friends to ask for the autograph of the man behind PhillytoLAonFoot. So, I've gotten used to it--it's the tough part of being a celebrity, but Brad Pitt will tell you that it's not all bad. Besides, I always have a tough time trying to figure out if I should capitalize the "to" and "on" in the web site address. You know--the tough stuff celebrities deal with.

So, it could be that. Or, more likely neighbors happened to be outside and wanted to know the name of the crazy person who was running in subzero temperatures so that they'd get my name right when they wrote up the papers for the loony bin. Yeah, that's probably it.

Oh, and on a related subject, the knee is definitely starting to feel better. It tends to have a little soreness 2-3 miles into a run, but if I stop for a second and start back up, I'm generally fine. I'll figure it out someday....
Posted by Road Warrior at 12:49 PM

Andrew is getting fit said...

I have the problem of having thousands of students knowing who I am. And I can't remember them a lot of the time so I'm always having strange people saying hello. Never on a run tho!

Great to hear you're back to running. Sounds like a great time to be doing so up there!

I(t looks like you are enjoying life between drinking bouts!

Oh to be young again!