Running as a tourist to see new sites 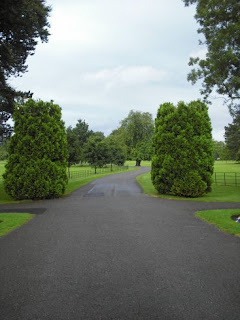 I was in Dublin for a couple days last week as I finished up my one-month European trip/vacation. I stayed close enough to Phoenix Park, so I was able to get a run in on Thursday. The park has a circumference of more than 11 kilometers (a bit more than 6 miles for those of you in the States) and has running paths throughout the whole park. I saw the American Ambassador’s and the President’s residence as well as the Dublin Zoo and a bunch of deer in a field (pictures are forthcoming).

First of all, I never would have seen this stuff if I hadn’t gone for a run (about 5.7 miles, by the way). Like in Amsterdam where I was passing the Van Gogh Museum and Rijksmuseum, I was seeing the world one foot in front of another. There’s nothing more interesting than site seeing while you run and boy does it make the run go by quickly.

Secondly, without fail someone will ask me for directions when I’m out running. I’m not sure if I look like a local (I don’t) or whether people just consider runners to be locals (maybe) or think that if they run through the streets that they probably know the streets names (not in my case), but I get asked for directions all the time.

Third, I get to understand the city’s layout for when I walk around later. I can generally recognize areas and get an idea of what I want to investigate more.

Finally, and this relates to the second point, I like feeling like a local. I do whatever I can to try to fit in by using the same lexicon as the locals (“cheers” instead of “thank you” and “straight-away” instead of “straight ahead”, to name two examples). I also try to find local restaurants, bars, etc. so that I can feel more at home. Running makes me a part of the city like few other things do.

Plus, there’s nothing wrong with killing a couple calories along the way. It just makes room for good Irish beer!
Posted by Road Warrior at 12:00 PM

Email ThisBlogThis!Share to TwitterShare to FacebookShare to Pinterest
Labels: Europe, Run and Shoot

You hit the nail on the head! I think running is one of the best ways to sightsee and that's why I LOVE running marathons in new places.

It's funny, but running does open doors!

I agree, I love running in new places while on vacation. From staring at all the really cool houses along Manhattan Beach to counting the ridiculuous number of Starbucks on one street in Singapore - it has made for some fantastic runs. Glad to hear you enjoyed your running while out in Europe!