Make a difference with your race medals 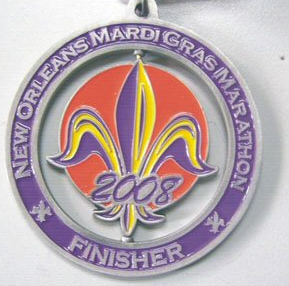 In the October issue of Runner's World, they highlighted a doctor who created a non-profit organization, called Medals4Mettle, to give race medals to critically ill patients. Steven Isenberg started giving his race medals to patients who were struggling with much harder races--the ones for their lives.

Runners can send their medals to this organization along with a legacy form that tells the patient why you're sending it and what it means to you. The organization then delivers the medals.

This struck me as an incredibly interesting concept and it has apparently gotten a great deal of positive feedback from patients. There's nothing like acknowledging that no matter how hard you worked for a 5K, 10K, marathon or whatever that there's someone who is struggling much harder for something much more important.

Dr. Isenberg mentioned that the kids especially like the medals from the Walt Disney Half and full marathons. I heard about some people auctioning them off on eBay after the race last year. This would be an excellent alternative and it would mean a lot to a sick child.

For those of you who just have medals sitting around, it may be a way to get rid of some clutter and do something that people will greatly appreciate.

As for me, I'm going to use my medals closer to home. I've got a number of people who are struggling on their own and I'd rather give them my medals, as it would be more personal.
Posted by Road Warrior at 8:00 AM

What a wonderful idea!

That sounds like a great idea! I can't believe that people would auction their medals on eBay....and why would you buy one (unless you lost yours)?

This is a very interesting idea. Right now I'm very attached to my medals but I'm sure someday they can be put to better use. I'll keep this in mind.