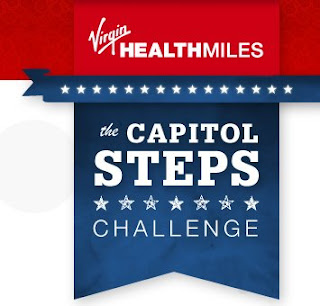 Virgin HealthMiles, a subsidiary of Virgin (owned by Richard Branson), created a Capitol Steps Challenge for the nation's governors and their executive staff. In this competition, the individual states compete for a $50,000 donation to their program for obesity awareness.

During the first two weeks of the year (which just ended), governors and their teams wear pedometers to count their steps. Fourteen states have participated and the results will be announced on February 20. Alabama is the current leader with Alaska (and their running governor, Sarah Palin) is second, followed by the Governator and California.

From the Capitol Steps web site on the effects of obesity:

According to the National Centers for Disease Control and Prevention’s (CDC) analysis of obesity prevalence among adults based on Behavioral Risk Factor Surveillance System (BRFSS) data, 16.5 percent of the population was obese in 1997. By 2007, the number had jumped to 25.6 percent, an increase of 155 percent. Childhood obesity is particularly alarming, having tripled in the past two decades.

Obesity is also costly, both from a hard numbers and human impact perspective. In 2000, the U.S. Surgeon General estimated that obesity cost the country $117 billion in both direct and indirect costs; today, that estimate is closer to $123 billion. Additionally, the Surgeon General’s data shows obesity is responsible for 300,000 deaths each year. And obesity-related conditions, such as heart disease, hypertension and type-2 diabetes, put further burden on the country’s already-strained healthcare system.

These statistics are sobering and speak to the ever-growing sedentary lifestyles we lead. I applaud these states and Virgin HealthMiles for creating this program. My hope is this program will continue and will influence others.

After all, one of the best ways to start exercising is to do it with someone else!

I love these programs which encourage people to do something rather than beat them around the head with the depressing statistics. It's all about somehow building fitness INTO your life - fitting it in somewhere. NOt always easy - it has to be said..

Too bad Mike Huckabee isn't still the governor of my beloved Arkansas. He was a diabetic obese man turned healthy marathoner!

Somehow we've got to do more to turn around this obesity trend. I don't actually think exercise is the only answer, though, as it seems that people's eating habits are just as much to blame, if not more so (my view from teaching fitness classes for 5 years and seeing many folks who exercised regularly but did not lose much/any weight because their diet did not change or actually got worse thinking they could eat more since they were exercising).

What an awesome idea! Anything that gets people up off their butts is a good thing in my books.