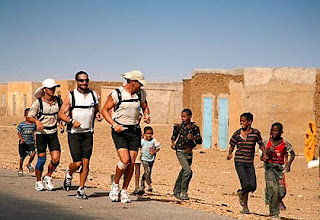 Showtime is currently showing a documentary called "Running the Sahara" where three guys attempt to run across the Sahara desert, from the Atlantic Ocean to the Red Sea, over 80 days. If you have Showtime (and especially if you have HD), I'd highly recommend watching it before it's out of circulation and you have to watch for the DVD release.

The three guys, Charlie Engle (USA), Ray Zahab (Canada), and Kevin Lin (Taiwan), are professional runners who have run ultras before, but nothing this big or this insane. Kevin speaks basic conversational English which causes some problems but nothing too big.

In order to accomplish this task, they have to run 4,500 miles, or the equivalent of about 170 marathons without missing a day. That's almost two marathons a day through the Sahara desert.

Along the way, they discover the huge problems that Africa faces with its water supply. This interaction leads them to start a non-profit called H20 Africa, and has sent them back to Africa to try to fix this huge problem.

From a purely visual perspective, this movie was amazing. It's shot in HD and the pictures are simply unbelievable. The producers, one of them being Matt Damon who also narrates, clearly decided that they were going to do a gritty documentary with stunningly beautiful pictures to enhance the experience.

From a running perspective, this movie was incredibly inspirational. This is a feat that humans aren't supposed to be able to do, and until they did it, no human had run this course across the desert. It was emotional to watch but more than that, it inspired me to do something huge (though I have no idea what that is yet). It's a movie that you should absolutely watch if you have any ability to do so.
Posted by Road Warrior at 2:00 PM

Thanks for the review. I'm going to look into this one for sure. Sounds amazing!

But now I am curious as to what you're going to come up with. ;)

great review, i'll have to go check it out. Ray also just completed another expedition to the South Pole (?) i think. thanks for the comment about the ex-smoking thing.... funny enough, i didn't think of that.

Very curious indeed to see what this is going to inspire you to do - after 48 miles in 48 hours I am full of anticipation...