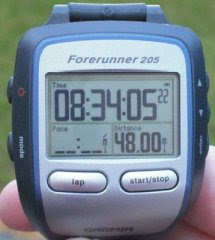 We runners talk about how simple running is. It's just your shoes and the road and it can't be simpler than that. Oh, how we try to coax those newbies into running by mentioning its simplicity.

Little do they know that not only can running get to be expensive, but it's also not all that simple, or at least doesn't have to be all that simple. We've got technology to complicate our lives, and complicate it it does.

I started by using the Nike+ system since I already had an iPod and figured that'd be the path of least resistance. Fast forward 6-8 months and the distance calculations were all over the board. I did a 20-mile run and it only recorded 18.2 miles. I'd go for a track workout and it'd be off by a couple tenths of a mile over a short 3-4 mile run.

And recalibrate and recalibrate I would. But the darn thing just didn't like me or it wasn't a good piece of technology. Either way, I broke up with my Nike+ in favor of a Garmin 205.

I've been quite happy with the Garmin 205, despite its large size. I've learned to set it outside a couple of minutes before heading out so that it can acquire it's satellite. I've also learned to start it about 10 minutes early if I'm in a new city more than 400 miles away. It will eventually find the satellites, but it takes a while.

And it's quite accurate, at least for me. If I map out a run ahead of time, the Garmin is almost exactly on. I haven't had the Nike+ problems.

I've even had good look in cities with tall buildings or running trails with lots of tree cover. The Garmin has certainly worked as advertised. I like the running calorie count, time and mileage, along with the elevation. In all, I'm quite happy with my Garmin.

That said, if I forget my Garmin or the batteries die, etc., then I tend to rely on two web sites: mapmyrun.com and runningahead.com. While MapMyRun is good, I think RunningAhead is even better.

MapMyRun tends to require a lot more waypoints to map out your run. You have to go and click at each intersection and turn of the road to ensure an accurate distance. However, with RunningAhead, it somehow knows the shape/turns of the road and makes the adjustments for you.

Additionally, you can get elevation maps on RunningAhead. I used it to map my 48 in 48 run last year. It's free and I still use it quite often in new cities or when I'm trying to map out a longer run.
Posted by Road Warrior at 2:32 PM

Email ThisBlogThis!Share to TwitterShare to FacebookShare to Pinterest
Labels: Take It and Run Thursday, Tips

You're so right; all the gadgets do complicate it!

I have discovered a new gadget that complicates running more so that I ever thought possible: a child. If I want to take the stroller out, I have to make sure to coordinate it with the feeding schedule and get him dressed appropriately. If I am going to use the treadmill in the garage (which I've only tried once with him) I have to go through the same feeding issues, plus dressing issues, AND get him in his little chair/rocker and haul him out there. Bye bye "out the door" easy running!

I had the exact same experience with Nike+. It was fun while it lasted, but definitely wasn't cutting it in the accuracy department. The 205 rocks!

Indeed, running is so much more complicated than it was 30 yrs ago when I started! I still struggle with whether I really need/want to know how fast or far I'm going or what my HR is. Does a run have to hurt, be fast or long to be fun? I don't know ... sometimes I think I really am a jogger at heart.