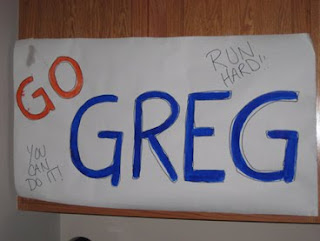 The day before the marathon was rather low stress. I had to wake up at a decent time to catch a flight to Newark, but then that's when the "stress" stopped. Flight was right on time and less than an hour--all of which I slept.

My friend picked me up at the airport and we grabbed a good sized burger before heading to his place. We then had to venture out again for race packets, but that took less than 45 seconds.

My family only lives an hour away, so they came in and stayed over the night before, and they were able to come over for dinner, which was great. Nothing like the calming effect of friends and family to keep your wits about you pre-race.

We also mapped out where the spectators would go. The marathon web site was fantastic. It gave spots where the relay teams would exchange, which was also a great spot for people to watch. I set all of the times approximating a 4:30 marathon. But my dad said then that he thought I'd go sub-4. I laughed and said that someone would have to pinch me because I'd be dreaming, and I told everyone that I would have absolutely no hard feelings if I went sub-4 and they missed me at the finish because of it... because, you know, it would never happen. My dad is much smarter than me...

I played my diet very conservatively on Saturday. I didn't want to try anything pre-race that I hadn't had before. Despite the pork and brownies looking amazing, I managed to stick with grilled chicken and a little bit of pasta for dinner. I had already eaten my large meal the night before.

I made a point to set everything out the night before and then I tried to get to bed by 10:30 or so because I had to wake up at 5. I tossed and turned a bit, but I think I finally got to sleep around midnight. I woke up once at 4 and then I was ready to be up at 5.

I walked downstairs to get my bagel with peanut butter, and I saw the sign my friends made me (see top left). It put a huge smile on my face and I knew that it was going to be a good day.

My dad picked me up and we drove the 5 minutes to the starting line (see? small races are great!) and we waited for the start. I stretched a bit and set up my iPod and Garmin, Gu'd up and then was ready to go.

Bart Yasso, a running hero of mine (and many others) did the pre-race announcements and then we were ready to go. 26.2 miles--here I come!
Posted by Road Warrior at 2:06 PM

I'm trying to channel your calm pre-race energy since I can already feel myself getting worked up.

Don't leave me hanging too long for the race report... :)

Like Marlene I too am trying to channel your calm and positivity. I think I can see how you got the result you got - it's all in the attitude..