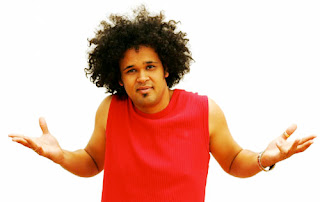 With all apologies to the Righteous Brothers' version, I've lost that competitive feeling. To be fair, it doesn't have the same ring as their version.

When I was younger, probably all the way through college, I was extremely competitive. Insanely competitive, really. I made everything a competition, either with myself or others. Sometimes they didn't even know they were competing with me, but I knew they were.

I remember having a fiery competitive nature which really helped to motivate me in whatever I got into. It helped to make me successful and driven. It also made me super intense and probably a little tough to be around at times.

This competitiveness really works and is necessary for some people. If it works and you like it, hey, stick with it. I just found that it was throwing off my balance and taking energy that I'd rather spend on things that were more important to me.

Over the last couple of years, I've really lost that super competitive feeling. It's not depression or a feeling of hopelessness or anything. It can't be. I'm happy and feel more at peace because of the lack of competitiveness.

This puts me in a pretty unique position around other law students. Law school pushes you to be fiercely competitive with others and with yourself. The really competitive (and less ethical) students hide books and try to psych others out. I just can't get that crazy competitive. It was in me before but it seems to have left me.

And this has translated into my running. In the past, I might have cared that I didn't PR in a particular race or that I didn't finish under some arbitrary time like 2 hours for a half marathon, or whatever. But I just don't care about those times and whether I PR or not. I'm really just looking to enjoy myself, put in an honest effort and let things fall where they may.

Take the Moose On the Loose 10M run, the XTERRA Stoaked Race this year or the Manchester Half-Marathon. I didn't break a PR, but I couldn't have cared less.

In the half-marathon I did this past weekend, the Seacoast Half Marathon, I didn't start out to set a PR. Really, I couldn't have cared less. I had already proved to myself that I could do whatever I put my mind to, ala 48 Miles in 48 Hours. After that, every race has been the proverbial icing on the cake.

It turns out that I did PR by about a minute or so. I think Petra put it best, though, "looks like everyone does better when they take the pressure off". Bingo! But if I didn't get it, would I have lost any sleep? Not a chance.

This attitude, not just in running but overall, has made me a much more relaxed person. I'm much more at peace now than I was when I was so competitive. I'm not only at peace with my successes and failures, but I'm at peace with and can celebrate others' successes. When you're not comparing their success to your success, you can be more genuinely happy with what they've accomplished.

I wish I knew where or when this competitiveness left me, but I don't really know where it came from. I think it just comes from growing up and recognizing that things that I thought were important really weren't. And being hyper-competitive and taking the energy to be that way was more taxing on me than it was worth.

I'm far from perfect and I "slip" from time to time, but I just try to remind myself that the more balanced I am, the more at peace I'll be and the easier success will come.
Posted by Road Warrior at 8:30 AM

Good post. In a way, I envy you. I don't tend to be competitive in my every day life, but I've definitely noticed a competitive streak in myself since I started running races just over a year ago. Maybe it's because I am such a new runner and I know I have not reached my potential, but I ALWAYS want that PR! I find myself getting more and more nervous before races and kind of which I could just do it and not care about the time. I have such a loaded schedule next year that I will have no choice but to run some "for fun" so I'm looking forward to that.

I'm an uber competitive type A++++ type of person by nature too. But watching my dad die of cancer and having my personal safety threatened twice has made me realize how short life is, too short to be putting so much stress on myself and being unhappy when I fail or fall short of all the crazy demands I put on myself. So now I prefer to work, train and race for fun. One workaholic is enough in our family.

I love this post. Isn't it incredible how things change when you let this feeling go? I can relate to some of it but I can really relate to the pressure issue - putting pressure on myself. Allowing myself not to put on so much pressure (and ShirleyPerly is an inspiration here) has been great - the world does not fall apart when I'm not trying to keep it spinning...

I'm so impressed with your attitude and the sense of peace emanating from you. Thanks for sharing!