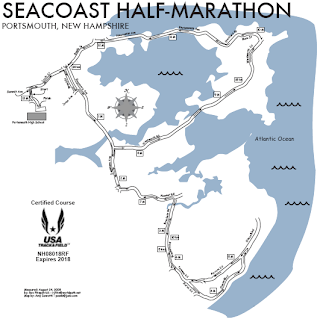 I ran the Seacoast Half Marathon yesterday in beautiful Portsmouth, NH. It was apparently a very popular race as they capped it at 1,200 participants and it sold out very quickly. I signed up in August and was in the 900s.

The pre-race packet pickup was extremely organized and went quickly. It was at the high school, which, for some reason, decided that it would be smart to have a swim meet that day to minimize the number of parking spots. Nice move. Either way, we got in and collected our packets without much of a problem.

From there, it was time to warm up a bit and wait for the race to get started. The walkers started at 8:00 and the runners started at 8:30. It had rained the night before and they warned us that some of the bridges would be slippery. In fact, an ambulance was on the scene at one bridge where a biker toppled. Good tip!

As I mentioned before, I had planned to run with Liz and Karl. Well, that happened for a little while, anyway. Liz wanted to run at a sub-8 minute pace, which wasn't working for me and I asked her to dial it back to around 8:30/8:45 so that we'd be OK in the later miles. She was fine with that and seemed to understand. This was the first non 5K race she's done, so she deferred to me.

Karl was with us, too, and we were together until the first water stop at 2 miles. I always slow to a walk during the water stops so that I don't choke on the water. Yes, I'm that graceful. They, however, did not, so they got ahead of me. I sprinted to catch up to them and we continued together until mile 6--the next water stop.

At that point as I grabbed water, took a GU and sucked both down, I lost them. They continued on the run and I could see them in the distance. It just wasn't worth sprinting to catch up to them. I talked with some other people who were running my pace and I figured I'd just see them at the end. I was more worried about both of them than I was about myself, so I was glad that they were watching out for each other together.

I was doing fine through some hills through miles 6-10. The course was beautiful and had us running along the water for part of the course and through very pretty towns. I really enjoyed the course layout.

At mile 10, my right foot started to hurt. If you're keeping score at home, it was actually my left foot that was killing me after the 48 Miles in 48 Hours fiasco. I was a bit surprised that my right foot hurt, but it did, and it hurt a lot. I could still run on it, but it was a bit painful. The problem was that I didn't have anywhere to stop even if I wanted to, so I just kept going.

It was at this point that my pace slowed to 9/9:15 per mile, from about 8:35-8:45. I was fine with that and just wanted to finish. I felt like I was going to be close to a PR, and if my darn foot hadn't been hurting, I probably could have blown it out of the water. Eh, whatever.

Though I'm not that competitive anymore (I'll explain that later this week), I at least knew about what my 1/2 marathon PR was. It was 1:54 and some change, and I'd never gone below that.

I approached the final two hills and then hit the finish line on a nice downhill sprint. I looked at my watch and realized that I was going to PR. I ended at 1:53:15 which is at least 45 seconds faster than my previous best time, but I don't know how much faster. Maybe a minute or more.

I found out that Karl had bonked at 10 and dropped back a bit while Liz finished strong. She finished at 1:49, Karl at 1:50-something and me at 1:53. Though we lost track of one another, we still finished pretty close together.

I proceeded to get some food (they had pizza, clam chowder, pumpkin pie, etc.) and then hobbled around a little bit while we waited for others to finish.

Overall, it was a great course and an enjoyable experience. I would do it again next year.

Next step: podiatrist and likely X-rays of my feet. My right foot is feeling a bit better today, but I'm not going to take any chances. It's time for some rest of this weary body.
Posted by Road Warrior at 11:27 AM

Sounds like a great race. I love the sound of that post-race grub. Yum! Congrats again on the PR! Now, take care of those feet!

CONGRATS on your PR!!!

Sorry about your other foot now hurting, though. Keeping my fingers crossed that it's nothing serious.

Best of luck with the foot and WOW what a post race spread! Great race and great report. No pics?

I love your tongue-in-cheek comments in your abilities as you succeed in spite of your conceptions!

Good to see that you are doing OK!

Congratulations on your race and your new PR! Yikes, sorry to hear that your right foot is bugging you now. Fingers crossed there isn't anything wrong with it, but a visit to a podiatrist sounds like a good idea, just in case.

That post race spread sounds pretty delicious! Definitely worth running the race for!