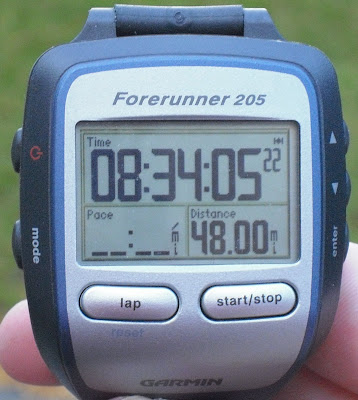 2008 has been a banner running year for me--by far my best running year so far. While I don't log as many miles as people like cewtwo (1,600 miles so far this year--beyond impressive), I've really enjoyed the running I've done and am looking forward to continuing at a reasonable rate.

I'm now officially halfway through law school (1.5 years out of a 3-year program) and could not be happier with the choices I've made. I'm loving every minute of what I do and couldn't picture myself doing what I used to do in corporate America.

Without further ado, here is the 2008 year in review.

The highlights are all encompassed into three big days which really define my running year.

I did my first (and only so far) marathon in February - the Mardi Gras Marathon. I trained outdoors through an unbelievably brutal New Hampshire winter to be ready for a balmy run down in the Big Easy. The run was tough and grueling, but there's really nothing like crossing the finish line at the end of 26.2 miles. I felt like I could conquer the world.

That is, until I got the idea of running 48 Miles in 48 Hours. While out during a particularly warm run, I decided that I would do a self-created ultramarathon. I wanted to give it a catchy name and I wanted to do it over 2 days, so I called it 48 Miles in 48 Hours. The goal was to take the tough part of the marathon out (the constant running) and break it into 6 8-mile segments over two days so that my body had time to rest.

Several months later, October 18 and 19, I embarked on the journey from Concord, NH to Tyngsboro, MA over a 2-day period. Friends met up with me along the way and I was never alone along the entire course. 48 miles tested my body, my mind and my soul. But, at the end of the day, my mind and soul won out over my aching body and I finished the run in 8 hours, 34 minutes and 5 seconds.

I simply can't describe the feeling I had when I finished the run in a condo parking lot at the end of my second day. There's nothing like knowing that you can accomplish whatever you want as long as you put your mind to it. That, and, well, I became an ultramarathoner--not a bad weekend. In addition, I raised over $800 for the American Cancer Society, an unbelievably worthy cause.

I had 3 posts that I loved throughout the year because I can go back and read them and still feel the emotion I had when I was writing them.

I can't write a year in review about myself if I don't include some of the accomplishments of my friends/RBFs.
Those are just the ones off the top of my head. Many of you have accomplished amazing things this year and it's been wonderful to read about all of them.

So far, no races planned for 2009. I've been running 4-5 miles about 4-5 days a week, which has been nice. I like that distance as it allows me to get miles in and still not be gone over an hour. So, for right now it's maintenance until I get the inkling to sign up for something.

I'm not sure if I'll do a marathon or an ultra this year, but something makes me think that I'll at least do a duathlon or maybe even a triathlon. I need to break up the monotony of running with some biking or swimming. Now I just need to force myself to sign up for a gym membership. I've been fighting it because I don't like being inside.

My New Years Running Resolution is somewhat personal, but it involves others as much as it involves me. I want to run a race with 5 people that I have never run with before. Some of these people probably will have never run before or maybe just at the gym. But I want to get 5 people interested in the sport, and interested enough to join me for a race of some kind--likely a 5K.

As I was training for 48 Miles in 48 Hours, I started to get other people interested in running. We talked about how far and how often they had run. We exchanged fitness tips and thoughts about nutrition. It was great to see people being so health conscious and I knew then that I needed to make it part of my running goals to get more people to join in.

So, to accomplish this, I need to start telling people about it. I can think of 2 people who will probably join me, but I'll need to find at least 3 more. There's nothing better than getting people involved in such a great sport.

At this time last year, I was on the road to Indianapolis, IN. Now, I'm just about to go through Oklahoma City, OK and I'm nearly halfway done with my journey at 1,354 miles.

What a great year!

CONGRATS on the halfway mark of law school. When I was halfway done with architecture school (2.5 years of 5) I threw a party. But it was snowing and no one came. Boo hoo! Arkansans DO NOT do snow.

As before Greg - your attitude is enormously inspiring and your outlook is always interesting. You really have a lot to be proud of and I really like your goal for 2009 - it's very possible! I'm starting a 10K training group at work for beginners - if I can do this, anyone can.

Greg, congratulations. What a truly amazing year you've had.

Thanks for the shout-out. Your support and encouragement in the weeks leading to my first marathon meant a lot to me and I will never forget your reminder that the marathon is a reward for the training.

I love your resolution - what a wonderful idea to get others involved in this sport of ours. :)

You definitely had an amazing 2008! Congratulations on your first marathon and your ultra as well. Your 48 miles in 48 hours was truly inspiring so I can't see why shouldn't be able to find another 3 people to inspire for your resolution. All the best for 2009. Thanks so much for the shout out Greg!

You certainly have had a great year and I'm so happy to have had the opportunity to meet you in person. Great resolution for the new year. I'll bet you can get 3 more people interested in running by simply continuing to be yourself. You are a great inspiration!

You did it last year. You were a main inspiration for e to set and attain a marathon goal. Thanks for that, Greg.

As for the miles? I have a Doctor's script! Gotta exercise or I'll get fat. So, I run!

I am setting a goal of attaining better speed, though!

Thanks for the shout out! You're a good friend!