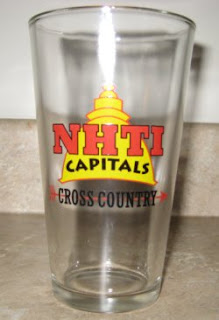 While I was on Active.com, I found a local race this weekend called 4th Down and 4 (Miler). The proceeds benefited the local college's cross country team.

It was a largely flat course, with just a small hill at the beginning and around mile 4. There were over 70 runners there--with 25 degree temperatures. I love it! I think you have to be proud of a group of people that can get up on a Sunday morning and bang out 4 miles.

As with all races, I started out faster than I normally would. I was in the 8:20 pace, which is about 25 seconds faster than my normal pace. I was feeling good and had warmed up so I just went with it.

I stuck behind a small group at the beginning and then started to feel better and better. So I kept moving up (or is it that others kept slowing down?). When I looked at my Garmin and it said 3.2 miles, I knew I wanted to pick it up. I had originally planned to just do a fartlek to the end of a building and then drop back down. But, when I got to the end of the building I still felt good, so I kept the pace (7-minute miles or so). And then I saw the finish in the distance and I still felt good so I kept the pace. I finished the race in a near sprint at 31:48.

That's definitely a PR for me (though I haven't done any other 4 mile races). It ended up being about 3.94 miles, but still, that's less than 8-minute miles on average. I was very pleased with myself.

We went inside and had a raffle. I was the first person called (got a gym bag) and then I was called again near the end and picked up some Double-Stuff Oreos (should go well this afternoon for the game). And then the awards ceremony came. I knew I had run well, but didn't expect to win anything.

Lo an behold, I came in 3rd in my age group (20-29). The second place guy was a full 8 minutes faster than me! Either way, I got a glass (see above left--not actually a flame; it was just the light) and a bag of chips.

So that was a successful morning. I burned calories, which I'll put back on (and then some) this afternoon for the game. And now I have a glass to drink from. Woo hoo!
Posted by Road Warrior at 2:43 PM

congrats on placing and the glass! Hope the drink was good, and enjoy the Super Bowl snacks now :) I should seek out little local races here... i bet they're fun.

Woohoo! A PR, an award and some raffle prizes -- what a day!!

Awesome time! Congrats on all the prizes.

Wow - you're a triple winner!

Awesome! Congratulations on coming in third and getting that very cool glass!