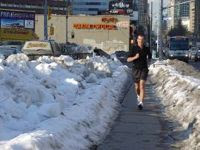 In what can only be described as an heroic, yet insane, act of endurance and logistics, an Irishman ran seven marathons in seven days in six different continents.

As detailed in the article, his 'marathon' marathon took him to Antarctica, Cape Town, Dubai, London, Toronto, Santiago and Sydney in just 5 days, 10 hours and 8 minutes. This was part of the World Marathon Challenge in which he raised money for GOAL, an Irish charity that raises money to respond to man-made and natural disasters.

Beyond the unbelievable endurance and huge changes in temperature throughout the nearly 6 days, I'm unbelievably impressed that he could do it logistically. He banked 26,719 air miles as part of this journey and a week that he will not soon forget. Wow!
Posted by Road Warrior at 6:08 PM

Wow! I bet there's a bunch of amazing marathon adventures out there.. Toronto made the list! YAY!

I absolutely love reading crazy endurance stories like this... so cool. Thanks for sharing.

That is an incredible feat both from a traveling and marathoning perspective!