I rode the GSW Century ride this past weekend. The organizers call it a "ride" not a "race", so I guess I'll be consistent. We woke up at 4 AM on Saturday and were on the road by 6. Hampton Beach State Park was about an hour away and we wanted to get on the road early.

When we got there, the place was packed with all sorts of serious riders with even more serious bikes. It made me chuckle at how slick a lot of the riders were with their specialty shorts, helmets and windbreakers. For me, I still wear sneakers (haven't upgraded to the special pedals yet) and I just started to wear biking shorts for longer rides. Clearly they were way out of my league.

We grabbed a PB&J sandwich and then headed south to Newburyport, Massachusetts. Very early on we realized that the road markings were going to be tough to follow. There was a lone yellow arrow on the road at random places and was often very difficult to see. We knew that we were going to have to be conscious of the poor markings. Oh, if only we knew then how poor the markings would be.

The first 16 miles were a breeze. It was still a bit chilly (mid 40s), but not too bad. We got back to the state park and had a decision to make: do we do the entire 100 miles today or break it up over two days? We had planned to do about 60 the first day and then the remaining 40 the second day, while we leisurely made our way up the coast, sampling lobster rolls, beer, and ice cream. But it was supposed to rain on Sunday, so we made the decision to do the full 100 that day.

We hit the road again and felt pretty good. We stopped again at mile 30 at a park along Route 1. Still feeling good and after sucking down half a PB&J sandwich, we continued on. In the past, we tended to go for longer rides and then take longer breaks (like an hour or two). Well, if we were going to do the full 100 in a day, our breaks would have to be no more than 30 minutes, and we'd need to be efficient about it.

We hit mile 38 and walked our bikes across the bridge into Maine. 12 miles later and we were at a SAG stop where we refilled our water bottles, grabbed some well deserved oreos and fig newtons and then headed out again. I was feeling great, but my friend's hip and knee were starting to bother her a bit. We didn't spend more than 30 minutes at the stop because we were only halfway done.

It was after this stop that the wheels came off the wagon, so to speak. Because they had distances for half-centuries, metric centuries (62 miles) and full centuries, the markings on the road got ridiculously confusing. And not only were the markings bad, but the map was worse. Because of the bad markings, we ended up making a circle back to the SAG stop, which meant that we missed 9 miles out and back (18 total) from the ride to Cape Neddick, Maine. Needless to say, we weren't very happy.

But we continued back and told ourselves that we'd just make up the mileage by continuing past the end/start point. We stopped briefly at mile 62 because my friend's hip was killing her. I fueled by consuming some peanut M&M's and gummi bears (the fuel of champions). We headed back to the start.

About 10 miles before the end/start point, we hit a tremendous headwind. As in, no matter how low the gear was, you were still fighting to survive. And we barely did. By the time we got back to the start, it was too late to continue the remaining 18 miles, and we were exhausted. We headed to the hotel to shower and re-group.

After a good meal and a good night's sleep, we headed out for doughnuts the next morning. Apparently, after the second glazed doughnut, we decided that we should do the remaining 18 miles, despite the rain and wind.

We drove to Nubble Point (the lighthouse) and then rode 9 miles out and 9 miles back to hit the even 100. The remaining 18 felt good, especially because we knew we'd be done soon.

All in all, I loved doing the Century ride. I probably could have done the century in a day, but it was fine to back it off to the remaining 18 on the second day. Since the ride, I haven't felt any soreness or pain. Clearly that type of thing must agree with me. 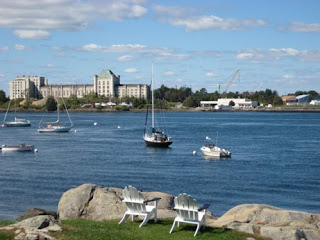 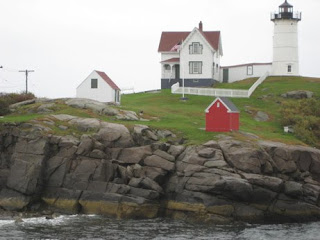 Nubble Point, the start/end point for the second day 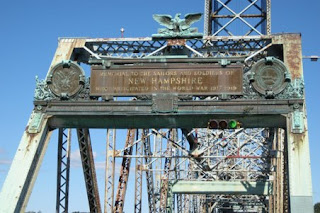 The bridge out of New Hampshire 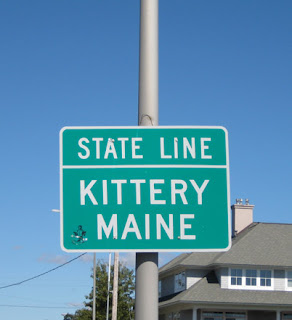 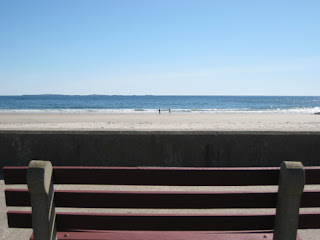 Big congrats on the Century! That is a long way to ride, especially completing the majority in one day. Looks like some great sights along the way.. Too bad about the confusin route/map/markings, though.

Wow, and you did the ride with regular sneakers? VERY IMPRESSIVE, esp. considering that course was NOT flat and the headwinds, not to mention the length you rode on the first day!

Greg, you continue to amaze me. Thanks for including some shots of the lovely scenery along the way too. Definitely beats what I've got in Central FL (blah!).

I am incredibly impressed with you. "Clearly that sort of thing must agree with me" Greg you are a well-oiled exercise machine! I like this, weeks after your first sub 4 marathon you just crank it out.

What really impresses me though is your relaxed attitude to the whole thing - it's not unusual from you but I love it. Keep it up!