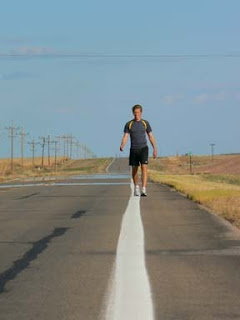 I recently watched the newly released movie, "Plan 9 From Syracuse". In this documentary, we follow Ryan Dacko as he runs from Syracuse, NY to Los Angeles, CA over a 120-day period in order to attract the attention of a movie insider. Dacko is trying to get the attention of Mark Cuban, owner of the Dallas Mavericks and founder of Broadcast.com, to get funding for his yet-to-be-made horror film.

Having only run a total of 10 miles at one time (10 years earlier in the military), Ryan has his work cut out for him. He needs to run about 30 miles a day for 90 straight days to get there on time. Needless to say, his body isn't so willing.

He's faced with support drivers bailing out, major injuries from almost the first day, and a dwindling budget. He diagramed the run on his web site and kept the country interested.

Overall, I thought the movie was just OK. It didn't start out to be a running movie and it certainly wasn't. I know this was just his way of getting Mark Cuban's attention. But, I think the movie could have been so much better if they focused a bit more on the running aspects of things. What's going on with his body? What should he be doing when attempting such a race? How should one have trained for something like this?

It does give an interesting look into the human body, though. Ryan's body just started to adapt to all of those miles, though there were certainly low points. It was inspiring and crazy, which I enjoyed.

It's a decent rental and you do end up rooting for the guy. If you see it, let me know what you think.
Posted by Road Warrior at 10:48 AM

So, does he get the guy's attention?

So, you expected a running movie? Or a runner's movie?