Motivation is just a plane ride away

These past few weeks have been quite leisurely, thankfully. After the bar, I needed some serious downtime and I got it.

I spent a week in my favorite city in the world, Seattle. Being in Seattle simply makes me happy. When I wake up in the morning, I smile and everywhere I walk, I smile. Seattle is my happy place and I make every possible effort to get out there as much as possible. 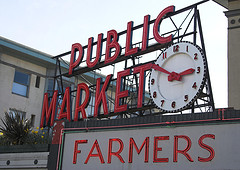 I go to my favorite bar, and I enjoy an adult beverage or two and I look out at the marina and just let my thoughts go. Going to Seattle is really an act of mental cleansing and I make the most of it.

It also allows me to run around the city and explore (though, frankly, I've seen most of the city by now). I went for a run one morning that took me to Safeco and Qwest fields (home of the Mariners and Seahawks, respectively) and I ended the run at Pike Place Market right in front of the guys who throw fish all over the place. The air was crisp and there wasn't much foot traffic so I just ran anywhere there was a walk signal. I felt like I could have run forever. And, if I hadn't had to check out of the hotel, I probably would have run another hour or more. It was just of those mornings. That morning, I remembered how much I loved to run.

I was also fortunate to stay with some friends in Green Lake, about a 15-minute ride from downtown Seattle. Green Lake is one of my favorite neighborhoods in Seattle. It's a little hippy-ish, which is fine with me. But the part I love is the 3-mile man-made lake with beautiful runnings paths around it.

We walked around the lake a couple of days and were able to choose between a gravel/dirt path and concrete. There were tons of bikers and people pushing running strollers, as well as a ton of runners. It was nice and cool as we strolled around the lake and the days were beautiful. 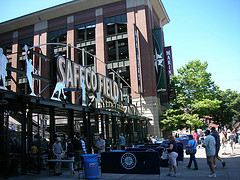 My second to last morning in Green Lake I decided to go for a run around the lake. From their place to Green Lake, around the lake, and back was about 4 miles, which was fine. Again, it was a little chilly and rainy but I couldn't have cared less. I kept a decent pace and stayed off of the concrete while I dodged others.

One of the things that I miss from New Hampshire is the lack of running paths in my area. Sure, you can drive to some, but they're not in my backyard and you can't walk or run to them. Having such a beautiful area so close to my house would be heaven.

Then again, if I want heaven, I may just have to visit Seattle again.
Posted by Road Warrior at 8:00 AM

Email ThisBlogThis!Share to TwitterShare to FacebookShare to Pinterest
Labels: General, Run and Shoot

Move, maybe? Looks gorgeous and I too adore Seattle..