Last weekend was a very successful weekend. I passed the New Hampshire bar exam on Friday, and I rode 100 miles across 3 states on Sunday. The 100-mile ride was the same one I did last year: the GSW Tri-State Century ride.

Wow, it feels like it's been quite a while since I've written a race report. It has, actually. The last one I wrote was after last year's marathon. It feels good to be putting some results up on the blog rather than just infrequent chatter.

We were up around 4:30 AM to get to Hampton Beach, NH for the start of the race. It was somewhat chilly, in the 60s, but not too bad. We started by going south into Newburyport, Massachusetts, and then came back into Hampton Beach to drop stuff at the car and to refuel for the day.
After tweaking a few things on my bicycle, we started the journey up to Nubble Lighthouse in Cape Neddick, Maine. We rode through Portsmouth and across the Maine border to finally turn around in Maine and then head back down to Hampton Beach. I rode with the same friend as last year.
So that we could keep a conversation going and so that I didn't get too far out in front of my friend, I rode rather closely behind her. It was a foot or two behind her, but it had to be about that close because I couldn't have heard her otherwise.
As you can imagine, riding that close to someone presents its own challenges. It all has to do with the other person slowing down. If I knew about the slow-down, I could adjust my speed. However, in Portsmouth, a family came out from the side street and she suddenly slowed her pace up a hill and I ran into her back tire. I went tumbling to the ground on my right side. I had some decent cuts on my leg and elbow and my hip has been bruised. I have just now been able to sleep on my right side. So, that was an adventure. She felt bad, but there wasn't much that could have been done. I'm not sure how to balance the riding close to the safety of more distance, but I clearly got the balance wrong up until that point. I decided that I'd keep at least 2 bike lengths between us for the balance of the day.
On the way back from Maine, I could tell that she was having problems, especially with the hills. Her hip had been bothering her, and she ultimately decided to stop at 67 miles (what I'll call a "Canadian Century"). She had the SAG folks pick her up and then I continued the remaining 33 miles.
The first 67 miles had taken us about 5 hours to do because I was riding behind her and just going at her pace. The general pace was between 10 and 12 miles per hour, sometimes less if we were on a hill. Once I started to ride by myself, my pace increased to about 16 miles per hour, sometimes as much as 22-25 mph, especially as it got closer to the end and I wanted to be done. 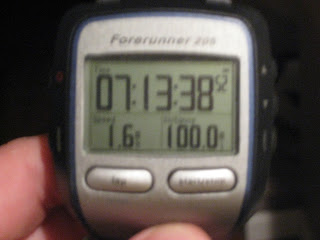 By mile 80, I was completely bored. I was alone, it was getting dark and there weren't any riders left on the road. (They were smart.) Of course I couldn't ride with my iPod in, so it was just me and my thoughts for the last 20 miles or so. It was at this point that I decided the quickest way to get these miles over with is to ride faster, much faster. So, I dialed up the gears on my bike (24th or 25th gear, I think) and decided to do the remainder of the ride as fast as I possibly could. At that point, I was going between 20 and 25 miles and I was freezing.
Because I didn't have enough mileage from a detour, I had to go past the final stopping area and continue back into Massachusetts to get the remaining 6 miles in to make it an even 100 miles. At that point, I wasn't about to end early and have less than 100 miles in. My friend drove to the end point and waited for me. I was playing mental games with myself. "OK, 5 miles left. I can bike 5 miles in my sleep. OK, now it's 4 miles and change. This will be over soon." And so it went.
I finally came up on 100 miles and I couldn't have been happier. I hadn't stopped in the 2 hours it took me to get back, so my electrolytes were low and my brain wasn't functioning as well. I felt like I was drunk and couldn't form sentences. Luckily, a small sandwich helped me to perk up.
All in all, despite the injuries and the cold, it was a good day. Last year, we did the first 82 miles on Saturday and the remaining 18 on Sunday. It was a century, sure, but it was over 2 days. This year I did it all in one day and it felt extra special that way.
Totals:
Miles: 100
Time: 7:13:38
Ascent: 3,548 ft
Descent: 3,652 ft
Average pace: 13.8 mph or 4:20/mile
Calories burned: 6,064
Published with Blogger-droid v1.6.1
Posted by Road Warrior at 1:03 PM

6064 calories! That's nice! Still haven't come near a century - haven't topped 30M yet - so you're way ahead of me. Hope you're better now after the fall - come over and cycle here soon?

Well done esp. after that fall!! It's unfortunate that family came up suddenly from the side street but I think falling going slow uphill is much better than falling going 20+mph downhill. There is also definitely skill and a lot of trust involved when riding in a group (1 or more people) close together. Usually the more skilled/faster rider(s) should always ride in front and the slower/less skilled rider(s) in back. The person in front is responsible for choosing the line and pace, and communicating hazards and what they're planning to do verbally or with hand signals (slowing, turning, pot holes, road kill, etc). If you feel up to trying a little of that when we're riding up in your area, we'd be happy to teach you. It's a whole 'nother way or riding :-)