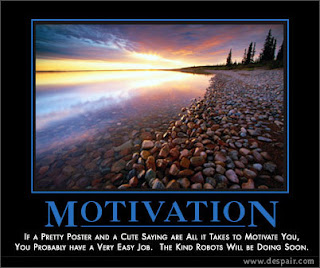 So, long story long, I need some motivation to get myself out the door and to start burning more calories. Much, much easier said than done.
Posted by Road Warrior at 9:11 PM

I sympathise, having lost my running mojo too recently. Fear seems to be my greatest motivator, but I've proved to myself that I can do the half marathon distance. I don't want to do a full marathon, so where am I finding my fear now? I suspect I may need to enter a hilly half marathon... Keep going! (I, too, hate and resist gymns.)

All you can do - in my humble experience - is get back onto that wagon. Initially it will feel awful and slow and you will feel fat (you might not be - but that is how I feel when I get back on) but eventually the habit starts to stick again. And yes - a goal is needed. The 16 miler is a good target, setting a PR (10K? half mary?) in the next year another?

I have always HATED gyms but all of a sudden, for no good reason, I am liking it. Yes it costs money. But it's also warm and dry when it's snowy outside and it's GREAT for speedwork on the treadmill and well - you could swim or bike as well?

Whatever you do - you need to make a change to shake things up. Shake something loose in yourself. Just read your next post - find a new tune and associate it with a fresh start.